The following problem suddenly turned up on my Windows 10 Laptop: I have been using the Windows Subsystem for Linux for years, and I've used git-lfs (git large file storage) on the WSL for several months now. However, starting today, when I try to do a git pull on the WSL with Avast (free version) activated on Windows 10, Avast kicks in and tells me that git-lfs is infected with ELF:Agent-AJO [Trj] after which git-lfs becomes unusable (even when deactivating Avast). With Avast deactivated, I succeeded in reinstalling git-lfs (with considerable problems, see below). However, I now have to deactivate Avast every time I run git-lfs on the WSL (I didn't manage to add an exception), which is quite annoying (and I do not think it likely that the threat perceived by Avast is real). Does anyone have any advice on what to do? 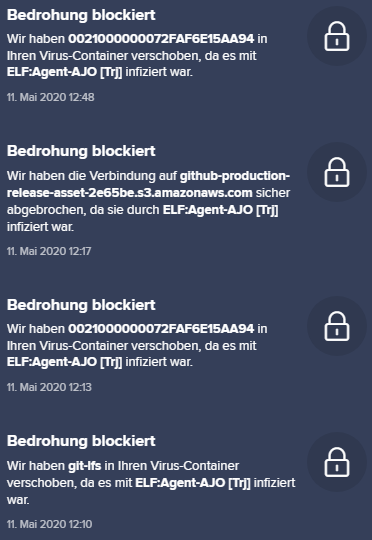 This is the Avast log (in German, the English Avast equivalent seems to be "Threat Secured; Moved ... to Virus Chest because it was infected with ..." / for the 2nd from the top: "Threat Secured; Safely aborted connection on ... because it was infected with ..."). The oldest entry (12:10) was when I first got the problem. The entry at 12:13 was a retry (without reinstall of git-lfs). The entry at 12:17 was when I downloaded the newest git-lfs version from https://github.com/git-lfs/git-lfs/releases/tag/v2.11.0 - I had to deactivate Avast to complete the download (the SHA256 checksum was valid). The entry at 12:48 was created after the reinstall of git-lfs. 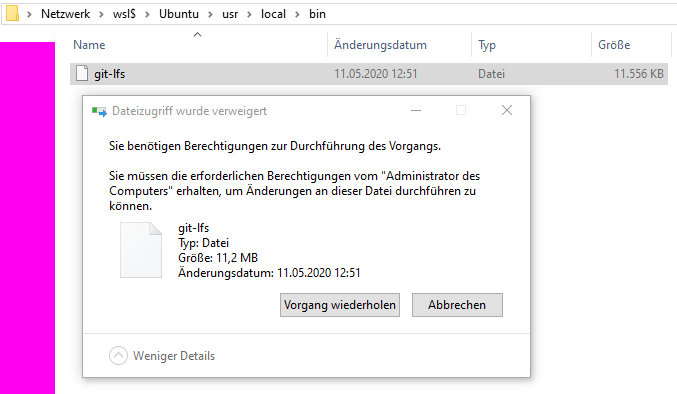